Marden’s war memorial (pictured) is inside the church on the West wall.  The centre panel contains the names of seventy men of Marden who fell in the First World War.  The side panels contain the names of twenty-four servicemen and five civilians who died in the Second World War.

In a moving ceremony on Remembrance Sunday each year the church gathers round the memorial whilst the names are read out.

The sub-menu above leads to more details about the various names added in the First and Second World Wars, and also Civilian Casualties. 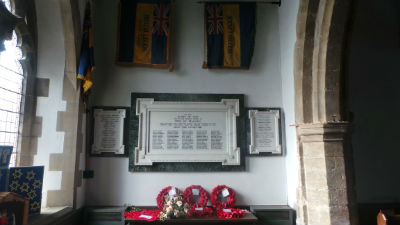 Two booklets have been produced by the Marden Society History Group giving brief details of the lives, service records and deaths of our war dead and including colour photographs of their resting places:

“The Fallen of Marden 1914-1919” (74 pages A4) covers the seventy men on the war memorial together with twenty-four on the Collier Street roll of honour and a further thirty-three casualties who were either born in Marden, or were living in Marden when they enlisted.  A total of 127 deceased.

“The Fallen of Marden 1939-1945” (58 pages A4) covers, in addition to the twenty-nine people named on the war memorial, twelve servicemen (eleven soldiers killed at the Pattenden Lane army camp and one sailor who died two years after the war) and one civilian.  A total of 42 deceased.

Reference copies of both booklets are kept on the table by the war memorial.  Copies are available for sale: please contact the History Group.