The bells are housed in our historic bell tower. Until the beginning of the twentieth century there were six bells, the oldest dating from 1693, these were recast into a peal of eight in 1909.
The present eight bells are housed in a frame built by Alfred Bowell in 1909. The majority of bell towers in the country have six bells, with only around 30% having eight bells.

More information about our team of Bellringers here. 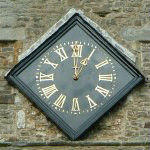 CHURCH CLOCK
The clock is in daily use by many in the village. It is linked to the tenor bell in the tower and can be heard chiming through much of the village.
The provenance of the church clock is uncertain. Pending further research we offer the following various and conflicting schools of thought:
1. The Diocesan Archivist has dated it to around 1740.
2. It was built at Marden’s West End Forge.
3. It was built by a Tippen in the 19th century.
4. It was built by a Mr Snachell in the 19th century.
It has for long been the Tippen family tradition that it is a Tippen clock. There were Typpens in Cranbrook around the time of the Armada. James Tippen, (born around 1801 in Maidstone), his grandson (also James) and great-grandson F.W., were clockmakers all (F.W. operating in Marden from around 1880 onwards). Although it has always been thought that either F.W. or his father built this clock, neither of them would be in line with the archivist’s date. Nevertheless the long family clockmaking tradition suggests that it could well have been built by a Tippen and around 1740.

The name 'Snachell' is engraved on the back of the clock. A Mr Snachell was a contemporary of F.W. Tippen (he too thus being some 140 years later than the Archivist’s estimate: was there an earlier clockmaking Snachell?).
If in fact the clock is 19th century rather than 18th, then the Tippen/Snachell connection might be explained in one of two ways:
(1) if the clock was made by a Tippen, it might have been owing to his nonconformist allegiances (the Tippens from 1800 onwards were Wesleyan Methodists) that he was not involved in its maintenance - the name Snachell being engraved by said gentleman at some later date during substantial renovation;
or (2) if it is in fact a Snachell clock then F.W. Tippen (being a prominent villager and clockmaker) might have been regularly involved in its maintenance.
In recent years the clock has been restored by Hop Engineering of Staplehurst. It is wound by hand twice a week. When adjusting the time it can only be moved forwards, so whereas the start of summer time is an easy job, in October it has to be moved on through eleven hours (the striking mechanism is silenced whilst this is going on!).
George Gilham, a former Verger, loved that clock. He it was who wound it in his day. If he could have chosen a place to die it would have been up by the clock, and so it happened. (Being the very private person he was, he would have been less pleased that both the ambulance and the fire engine had to be called to get him down.)

Our request for reader response has brought forth the following snippets of local clock- and watchmaking history:

1774 – From a diary kept by John Williams, a Marden youngster apprenticed to a Milton solicitor: he has a watch made by Mr Couchman and pays for it (via his father in Marden) in guinea instalments (a guinea = £1.05)


If anyone can shed better light on any of this, we should very much welcome it.
If you have any further infomation or would like to know more, please email: history@mardenchurch.org.uk 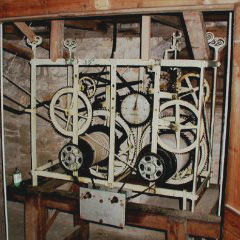